A Call to Stay and a Call to Go 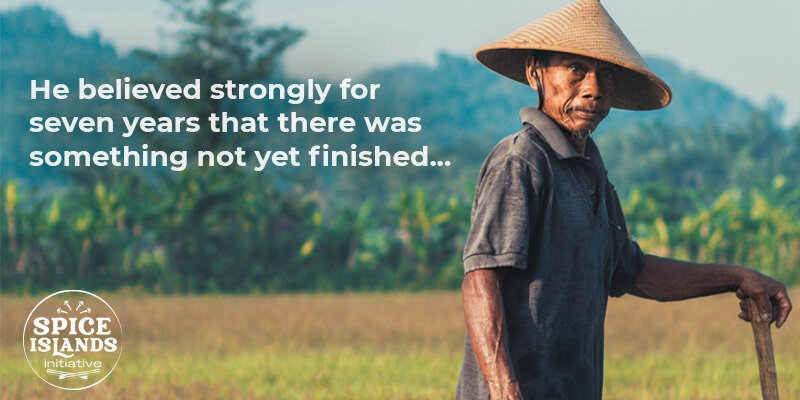 The Spice Islands Initiative journey has been one of faith, divine intervention, and sometimes fear.

In January, I had the wonderful opportunity to meet with a local partner in Indonesia. For his safety let’s call him Panji. On the first day of Panji’s visit, we were sitting in the living room of Converge International Missions Director, Ivan Veldhuizen with his wife Suzan. While we enjoyed some ice cream, Panji asked if he could share the story of how God had connected him with Converge. My interest was peaked.

This is his story…

Panji was tasked to take over leadership of a ministry to reach people in his country. He was hesitant for a few reasons. It was very small, he was only guaranteed two months of pay, and there was a lot of strife within the team at the time. However,  he and his wife prayed about it, together. They both felt God calling them to take over despite the obvious deterrents.

When they took over the ministry, the first thing they did was bring the entire team together for a time of intense prayer and fasting. Their bold prayer during that time was that God would make 2013 a significant year in their ministry.

Later that year, Ivan took an exploratory team to investigate  the Spice Islands Initiative, in the very area of Panji’s ministry. They met Panji on this trip, and he gave them the lay of the land both physically and spiritually. For Panji this seemed to be a direct answer to their prayer.

It took a while to get the Spice Islands Initiative going for Converge. Some of the people in Panji’s life urged him to sever connections and forget about it. Nothing was going to come of this. Still, he believed strongly for 7 years that there was something not yet finished.

As Panji told his story, my heart started pounding. My mind was reeling. As he finished his story, I raised my hand and said “I think I can add something to this story.”

At the beginning of 2013, I was getting ready to leave active duty military, my family and I were leaving Maryland.  We had already moved out of our home into a small apartment to downsize in preparation for our move back to Oklahoma to be near Jane’s and my families. As we began to get closer, Jane, the detailed person of the two of us, wanted to make further plans. However, I began to feel unsettled about our move and I didn’t know why. We both had prayed about our move back. We began to pray together again regarding our plans.

Fast forward seven years to me sitting in that living room with Panji, and I sense God telling me that us staying in Maryland was directly connected with Panji and his team praying all those years ago. In that moment, God showed me yet again, this is His work, and He’s already got a local partner and friend in bringing the Gospel to the unreached people in Indonesia.